During Book Week (2nd March – 6th March), we had many guest speakers talking on different topics revolving around climate change and our environment. Year 8’s Hannah Bryan, Amelie Deluca-Perry, Madison Deluca- Perry, Melissa Coleman, and Mollie Brown wrote a summary of what we learned over the week.

“There is no planet B – think globally act locally”

We were very lucky to have an interesting and exciting book week here at Burgess Hill Girls. The amazing Ms Akehurst arranged for speakers and other authors to talk to us about this year’s theme of climate change.

To start the week off, we had a talk about fast fashion, the second largest contributor to climate change. We also learned ways in which we can make our clothes more sustainable, such as clothes swaps and buying clothes from more sustainable places like thrift stores. The talk was by Diana and Mica, who both work in the fashion and textiles industry and have started a business called DOLLY together. We learned that it takes three years’ worth of drinking water to make one cotton t-shirt, that’s 2,700 litres of water. This is because cotton is a very thirsty crop and in order to help provide enough water for the cotton, the Aral Sea, that had been full of water in 2000, is now a barren and dry place. This has happened simply because of the production of our cotton clothes. After this talk, we were all inspired to buy less clothes and make do with what we already have by repairing our clothes to make them last longer. 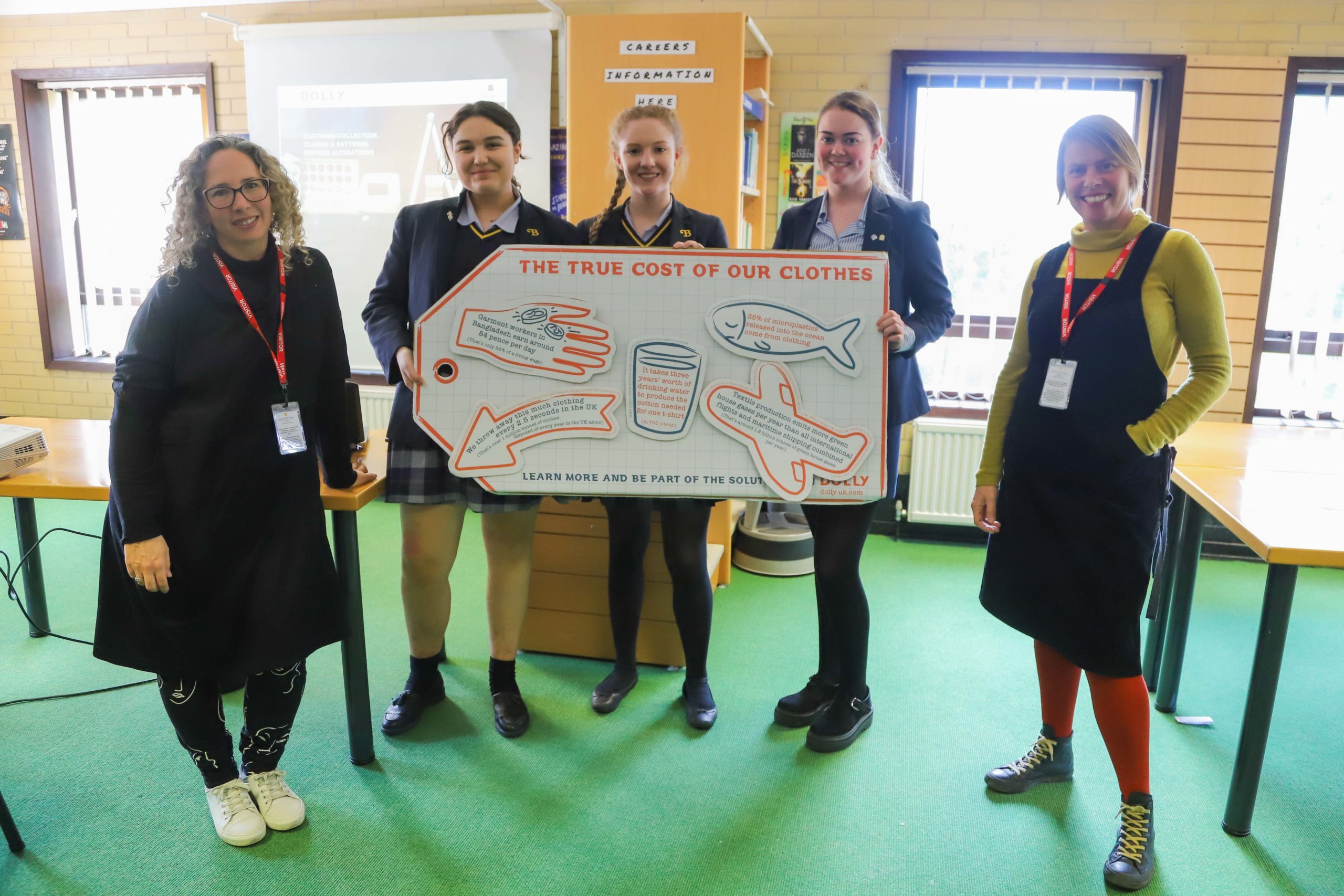 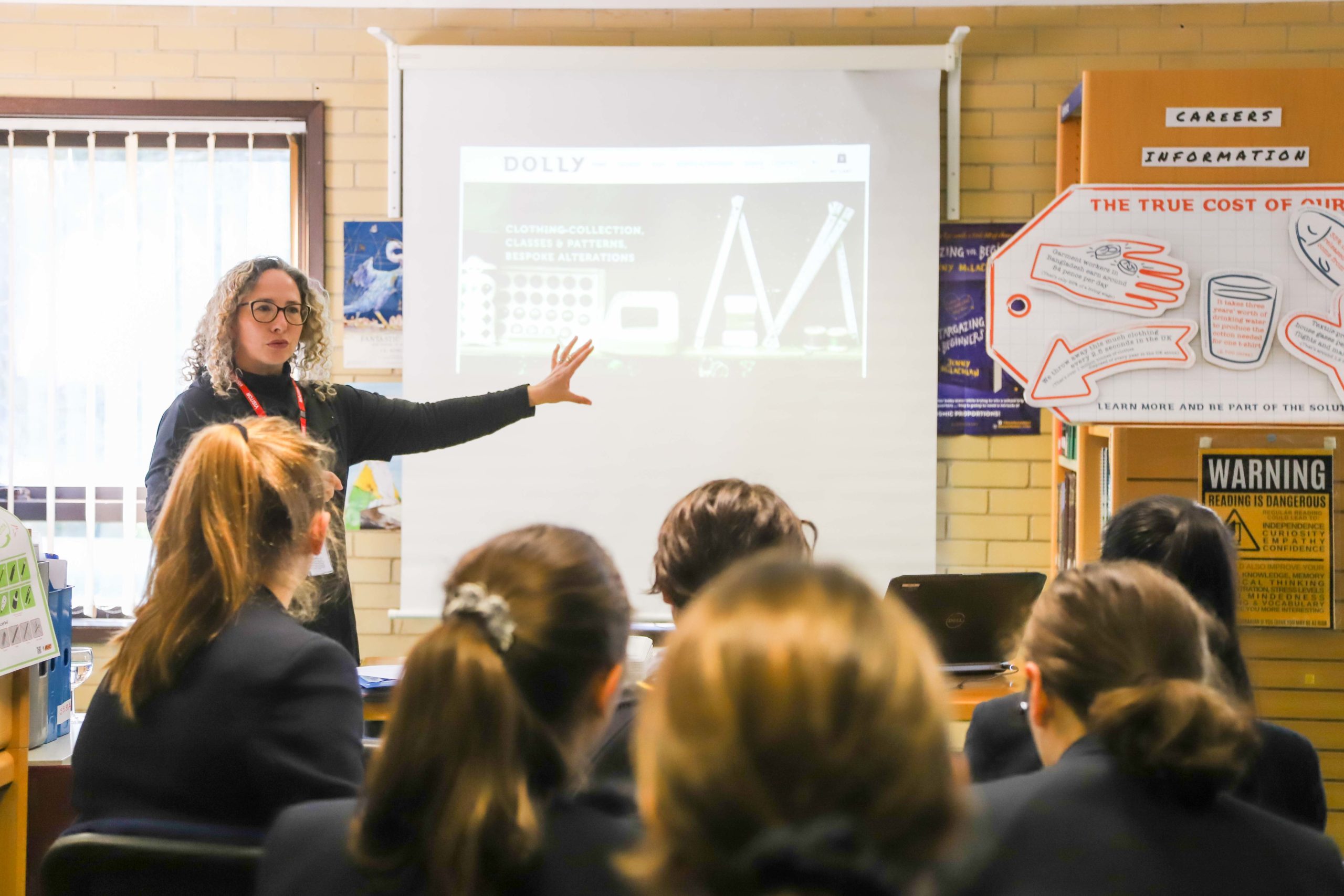 On Monday, Nicky Singer, the inspirational author of four adult novels and two non-fiction books came to talk to us. She is a well-respected writer and her books have been turned into operas and even musicals.  Nicky Singer also won the Blue Peter ‘Book of the Year’ Award for her first children’s novel called ‘Feather Boy’, which was adapted for TV. The TV show earned a BAFTA for Best Children’s Drama. After this, the show was commissioned by the National Theatre to be performed as a musical. Nicky Singer explained the process of writing a play, and how this differs from a book. 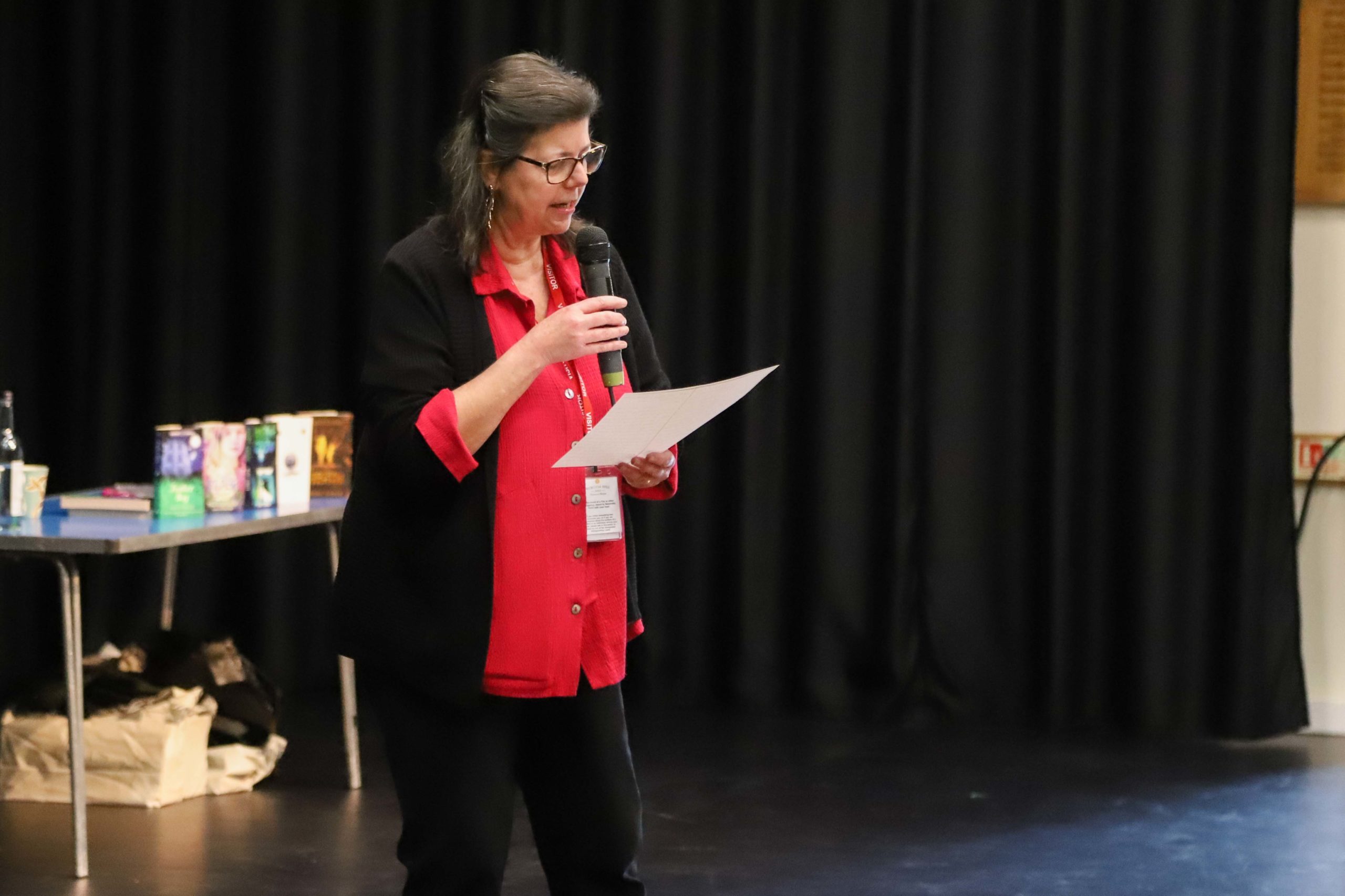 The Year 6’s, 7’s and 8’s were very lucky to spend the afternoon listening to her talk on her two most recent books, ‘Island’ and the ‘Survival Game’. Nicky Singer began her talk by explaining how she became a writer and what had inspired her to become an author. In the 1960’s (when Nicky was a child), Cadbury’s held an essay competition and she explained her love for taking part in this. Every year, she remembered receiving a box of chocolates for her entries which sparked her passion for writing. This inspired us to enter similar competitions too. Nicky’s first book was called ‘Pip’ which she wrote at just age 10. We were lucky enough for Nicky to read us an extract. Despite the frequent spelling mistakes, we found the book was incredibly detailed and very imaginative for a mere 10 year old. Nicky described the book as ‘lively’. She also told us about her learning curve as a writer and how her style matured after her father died when she was only 14. Despite her grief she still enjoyed storytelling and creating magical bedtime stories for her sisters. After her childhood of writing, she began to develop many more ideas for books and explained her two latest novels: ‘Island’ and ‘The Survival Game’.

‘The Island’ is a book aimed at 9-12 year olds that follows an urban teenager named Cameron. Cameron has to follow his mother (a researcher) to an Arctic island. Here he meets an Inuit girl who tasks herself to educate and enlighten Cameron about the island home and how it is going to be destroyed because of what his “kind” are doing. Nicky Singer originally wrote this book as a play for the National Theatre. The island that features in the book is based on an actual island in the Arctic Ocean, where the native people used to bury their dead under the snow. However, because of climate change and global warming, the ice that was once on top of those graves has melted. As the cold has protected the bodies they are starting to re-emerge, complete with preserved flesh on their bones. “The graves were opening”. After Nicky Singer wrote it, the play was a massive success. But after it had finished there was no physical reminder of the story, so Nicky decided to write it as a book. Nicky Singer described her troubles with writing the book as she had to pad out a story that was already clear and concise. When she was close to finishing it she had doubts about whether she should publish it or not, so one day she went to Waterstones to explain this to her publisher. While she was there she met Chris Ridell, who kindly offered to illustrate her book for her.

‘The Survival Game’ is a book aimed at young adults that follows a teenager called Mhairi as she tries to make her way to Scotland to get to her Grandmother. She travels all the way from Sudan. She is forced to leave her home because of climate change and the effect that has had on her home. During her long and arduous journey she meets a young boy who is mute and travelling alone. Mhairi decides to help him despite the fact that she barely has enough supplies for one person, let alone two. This is a book about courage and standing up for what you believe is right.

After her talk, we were all encouraged to buy one of her books and get it signed so that we can read for ourselves and discover the important messages they deliver about our future. 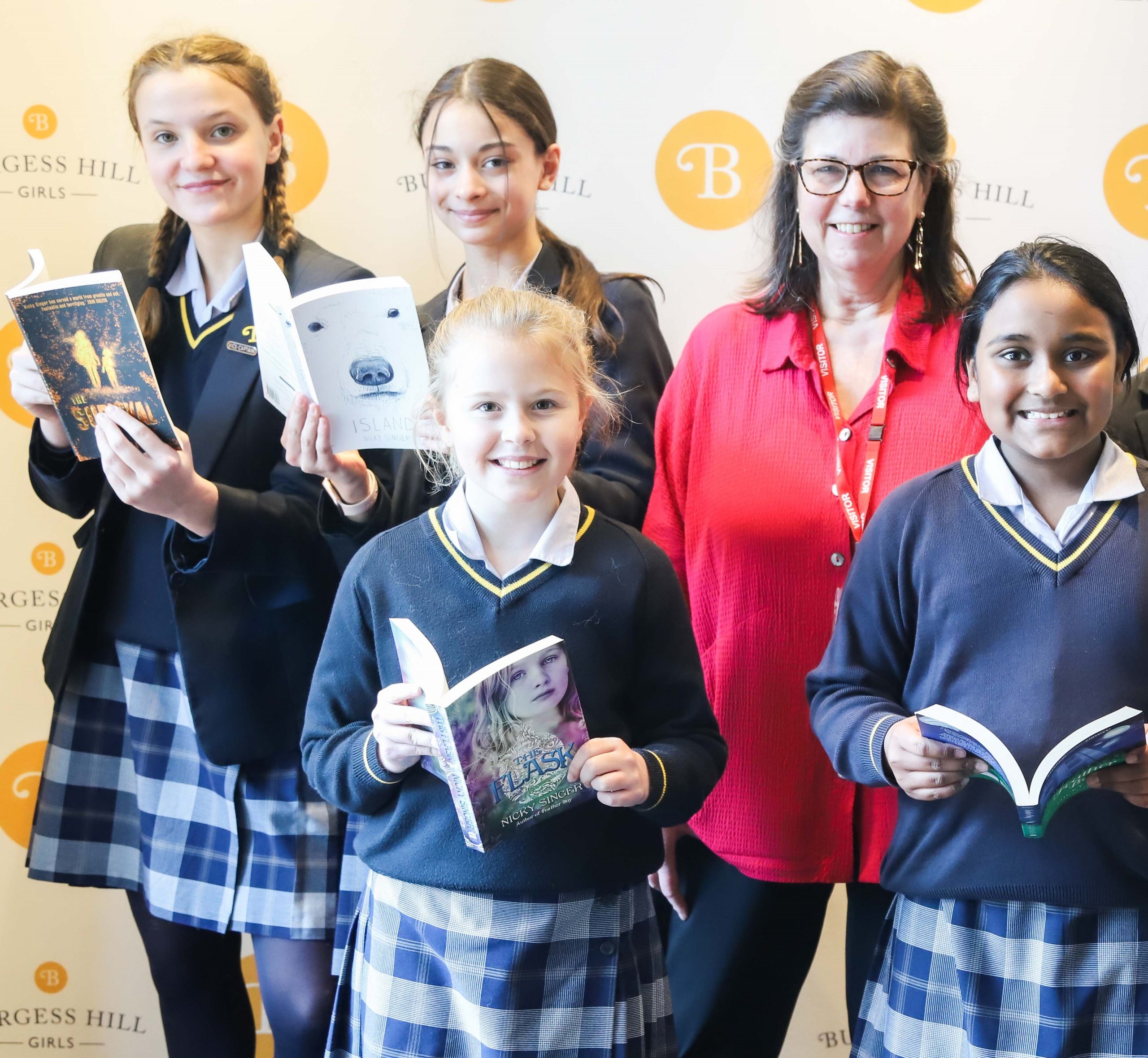 We were excited to have Juliet and Sue talk to us about Plastic Free Lewes, an organisation founded in 2018. We learnt about how plastic is influencing our environment and what we can do locally to prevent this. Plastic can be very useful, it has changed our world. However, it is also choking this planet. 400 million tons of plastic are produced each year and over half is thrown away after one use. Juliet showed us some plastic free items that we can use in everyday life. One of our favourites was natural toothpaste. Inside normal toothpastes, there is actually lots of plastic designed to clean our teeth. This toothpaste is completely plastic free and you can buy it online. We also learnt about how long plastic takes to decompose. One of the most interesting facts was that Oliver Cromwell’s nappy has only just decomposed. Other things such as crisp packets, tea bags and cigarette ends take hundreds of years to decompose. To finish the talk, Sue and Juliet shared their biggest message: reduce, reuse, refuse and recycle. As young people today, we have a voice to change and it’s time we used it.

On Wednesday, Dr Martin Meadows came to talk to us. Dr Meadows has advised ministers for 16 years and even taken part in the United Nations negotiations for climate change. In his talk, he shared with us a very prominent pie chart. This showed us that 80% of the world’s energy sources are non-renewable. One of the biggest surprises was the energy used in our homes. We must cut our energy use. The UK alone has already cut 10% of our carbon emissions but in 10 years we must cut this by a further 18%. We also learn about the ‘Paris Agreement, and what our country has to do in order to withstand this part of the deal. The agreement was published in 2015 and informs the UK they need to be at 0 carbon emissions by 2035. In order to do this, humanity must come together to provide more green spaces and help developing countries. 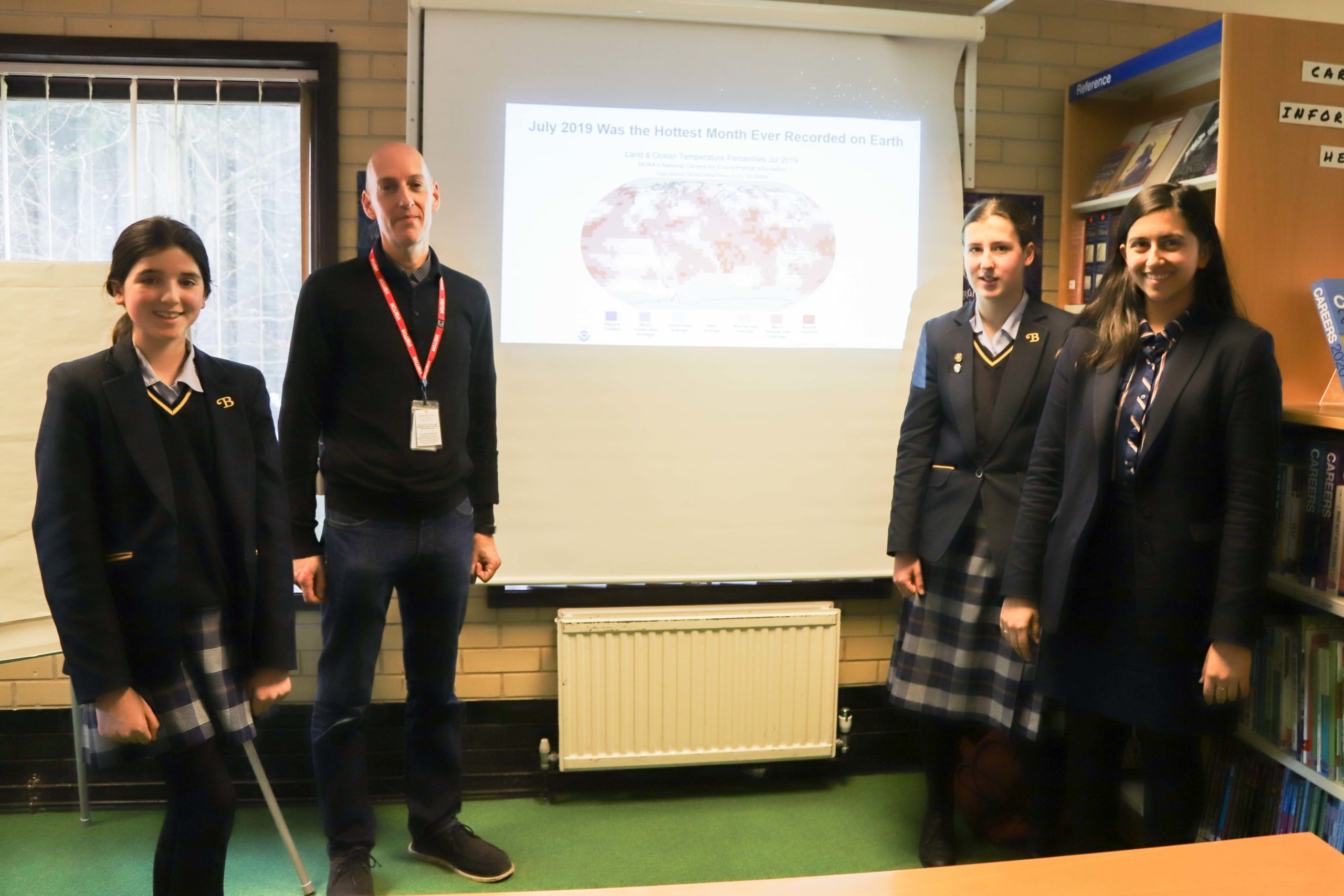 On Thursday 5th March, Alice Tebb came to talk to us. She talked about marine conservation and exploration. This talk was inspiring and gave us lots of information about the animals that live beyond the beaches and how we depend on them. Alice showed us some beautiful images of the sea creatures off the Sussex coastline. We saw a rare kind of seahorse, cuttlefish, shark, squid and many other colourful types of fish. She described that they all live in a kelp forest. These forests are vital for the environment as they store carbon and make a huge difference in supporting both life in the ocean and our planet as a whole. So why are they disappearing? Sadly, as we pollute our seas and oceans with oil, this affects the kelp and stops it from growing properly and sometimes kills it. Animals have even been left homeless or endangered. Alice showed us that off our shoreline there is a rare type of chalk that animals like to burrow into because it is so soft. However, humans have taken this and damaged it with our ships. People from the marine conservation community are some of the leading pioneers of marine conservation. They have managed to protect the site from further destruction and plans are underway to grow more of this rare kelp. Alice showed us the positive side of climate change and all the amazing people working hard to fight it. We all enjoyed this eye opening talk about our seas and how we can all help to save them.

On the last day of book week Ms Akehurst played the film “An Inconvenient Truth – sequel to power”. The film is about how Al Gore (former vice president of America) continues to battle climate change. The movie shows how he has persisted and dealt with people not listening to him and how he still makes a difference. This taught us that we can make a difference on our own. In the film Al Gore talks to the audience through the negatives of climate change. By the end he told the audience that we can still make a difference and fight it. This left us with the fresh ideas that we can still make a change.

Read our other reviews from the week: