Friday 26th May 2017 promised not only hot sunshine but an exciting day ahead for Year 3 as they were to visit Fishbourne Roman Palace to support their history topic, ‘Swords and Sandals’.

Straight into workshop activities, the girls dressed as Roman slaves, received orders in the kitchen, used their strength to grind corn by turning quern stones, wrote in Latin and played typical children’s games and puzzles of the time.

In awe of the amazing, preserved mosaics in the palace ruins and with sketchbooks at the ready, they settled down to draw their favourite patterns as inspiration for their own designs back at school.

The girls had time to look at interesting exhibits in the museum (including a skeleton) and watch a fascinating audio visual show describing the excavations of the palace. 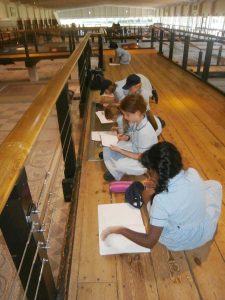 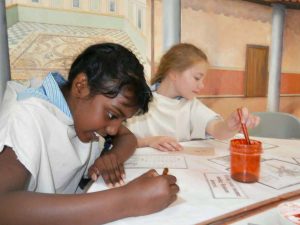