The French Exchange trip to Avignon

The second leg of this year’s French Exchange recently ended as fifteen Year 9 and 10 Burgess Hill girls returned from the sunny Provence, having previously hosted their partners in October.

After a very early departure – both for the girls, the parents and the teachers– the group arrived at Collège Champfleury in time for lunch after which they headed for Avignon’s famous bridge and from there to the Popes’ Palace. An atmospheric walk through the vast rooms of what is one of the largest gothic palace in Europe ensued, followed by a well-deserved ice-cream.

It had been a long day and it was time to go home with the partners and their families. Most expressed a little apprehension but this had disappeared by the next morning as the girls agreed that it hadn’t been as hard as anticipated. In fact during the whole trip the girls showed themselves to be a thoroughly enthusiastic, curious, friendly and positive bunch.

The morning was spent in lessons with the partners and the afternoon with their families as French children don’t go to school on Wednesday afternoon. Some visited famous Provençal villages, while others did a bit of shopping with their partners or played Laser tag.

The next day they took a train to the stunning city of Arles where they explored some of its many Roman treasures such as the amphitheatre, the theatre and the cryptoporticus – the lower level of the forum – the latter bringing some welcome relief from the bright sun as it is completely underground. They also wandered through the shady squares and winding streets on the look-out for the scenes of some of Van Gogh’s most famous paintings. A dip in the Mediterranean Sea at the historic gypsy village of Les-Saintes-Maries-de-la-Mer was surprisingly refreshing due to the effect of the infamous “Mistral” wind that had been blowing the previous days.

On Friday they canoed 8 kilometres down the peaceful river Gardon, passing under the magnificent Roman aqueduct, the Pont du Gard, which was followed by a visit of the picturesque town of Uzes in the afternoon.

Saturday was spent with the families and soon it was time for the girls to pack their bags. Very positive French families came to wave them off on Sunday morning as the group left behind the already balmy temperatures, a bit sad but also a great deal more confident than when they arrived. 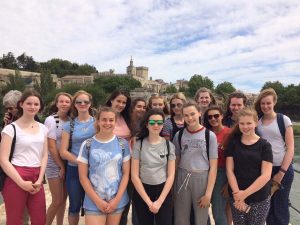 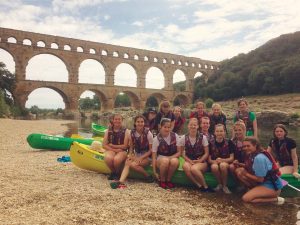 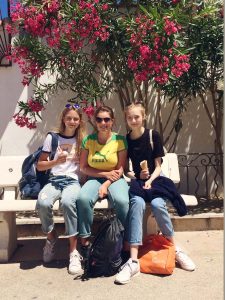 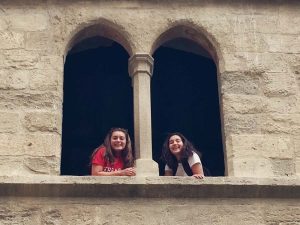