Our students have created a special hat for an inspirational cancer awareness campaigner to wear for the New York marathon.

Sara Cutting, who has raised £35,000 for Macmillan Cancer Support since being diagnosed with breast cancer four years ago, head to the States to run the New York Marathon.

Mrs Flint, Assistant Head, said: “As soon as Sara visited Burgess Hill Girls to talk to our Year 8s about how she turned a life-changing diagnosis into a burst of creativity and campaigning, the students were blown away by her personality and passion for life. Our Year 11 Fashion and Textiles group were keen to take up the challenge of creating a unique hat for Sara to wear in the New York marathon and they have had a wonderful time designing and constructing it. We feel honoured to have added to Sara’s awesome collection of hats and we hope it will contribute to her inspirational fundraising campaign, which does so much to raise awareness of breast cancer.”

Sara – Twitter’s @fizzysnood – from Brighton, started the popular Daily Headgear Challenge on social media during chemotherapy, when she started losing her hair and decided to shave it off to take control of what was happening. Her aim was to post a photo of different head gear every day for a year to raise funds for Macmillan, as well as awareness of breast cancer. Now almost 1,500 posts later, two Brigthon marathons and four Half marathons, Sara has raised £35,000 for Macmillan.

Sara said: “I am excited and privileged to have a bespoke hat made by the creative young women at Burgess Hill Girls. The hat is so personal as it will be worn in memory of three dear friends who have died in the last six months; their names have been embroidered into the hat. I am very grateful for the time, energy and skill that’s gone into creating this millinery masterpiece and I will wear it with pride. No doubt it will help me run a little faster too!” 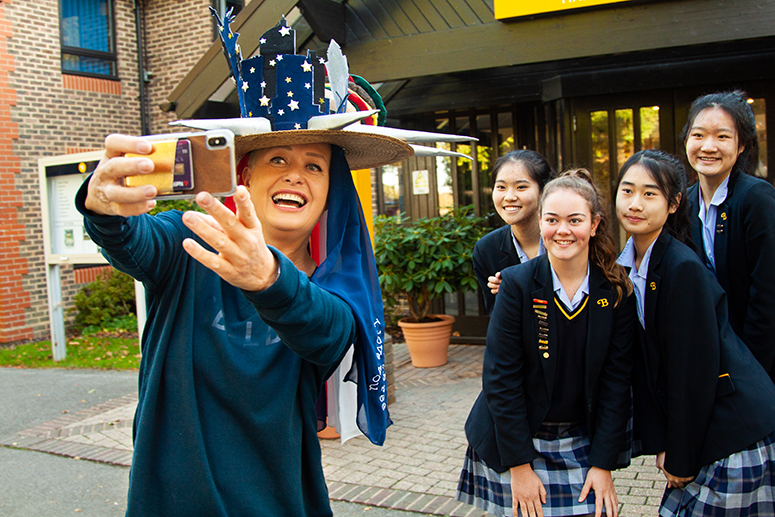 To donate to Sara, visit  www.justgiving.com/chemosnoodhead