Last week we marked Anti-Bullying Week with a visit from K-Pop singer-songwriter Becky Jerams and BAFTA-winning songwriter Ellie Wyatt. The two have teamed up to write a Young Adult fiction (YA) booksical called ‘The Songs You’ve Never Heard.’ 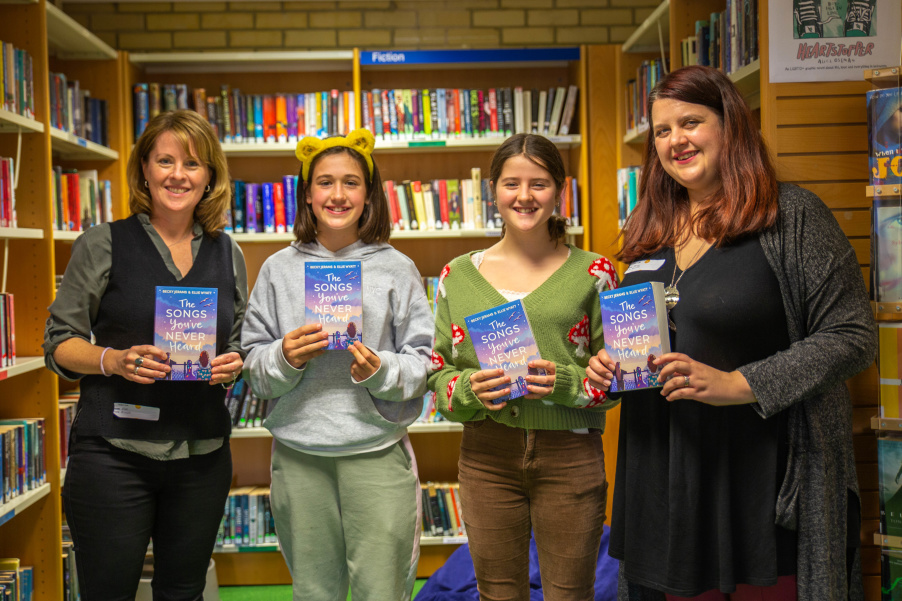 Championing sisterhood, musical talent, and body positivity, the booksical tackles many different themes including finding your own voice, navigating the ups and downs of social media, the challenges of the music industry, female friendship and of course, love.

The booksical is particularly special for Burgess Hill Girls because the current Lower Sixth were the first ever readers of the first draft back in March 2019 and gave Becky and Ellie feedback which helped shape the novel and find a publisher.

Becky and Ellie delivered a careers talk, a workshop and an assembly about what it is like working as women in the male-dominated music industry and the importance of saying ‘yes’ to every opportunity. “Collaboration is super important because you learn something from every partnership,” Ellie explained. “It’s really important to let go of the need for your creative output to be perfect. Perfectionism is the creative career’s greatest enemy. We need to find inspiration and work up multiple different ideas all the time, from music for a children’s TV show to a Dutch pop star’s next hit, delivering new outcomes for a client to choose from. Some of them will be brilliant and some of them less so but they will all be stepping stones along the way to the final idea. It’s the process and the journey that’s important.”

Year 9 students at Burgess Hill Girls read one of the book’s key moments where Meg rescues her friend Alana from a ‘doom spiral’ after she reads negative comments online and doubts her talent. “Negative comments online can have a devastating effect on young women,” said Becky, “not least because they receive a disproportionate number of them. We wanted to show how female friendship, solidarity and celebrating each other’s successes is so important. One woman’s win does not mean another’s loss; there is plenty of success to go around. And female friends are our best champions.”

Paperback copies of ‘The Songs You’ve Never Heard’ can be bought via Waterstones.com for £8.99. Listen to the soundtrack on Youtube.