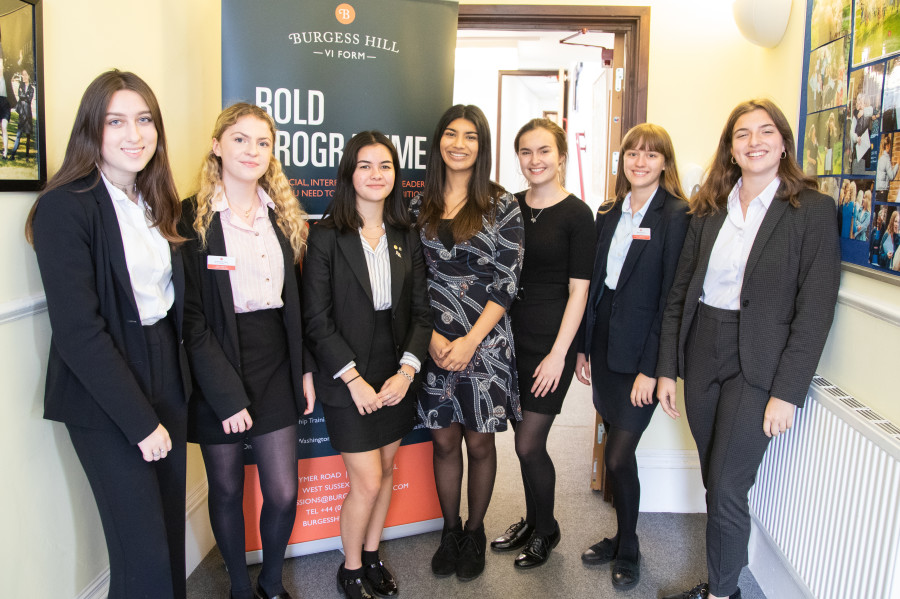 To reflect our mission to develop Tomorrow’s Women we always ask a Bold Girl to speak at our Open Days. It gives both girls and parents a chance to imagine what they might be able to achieve in the future if they join Burgess Hill Girls.

For our 2019 Autumn Open Day we were delighted to welcome back Nikita Khandwala.

She gave a truly inspirational and thought provoking speech. Rather than summarise it we thought we’d share a transcript here. 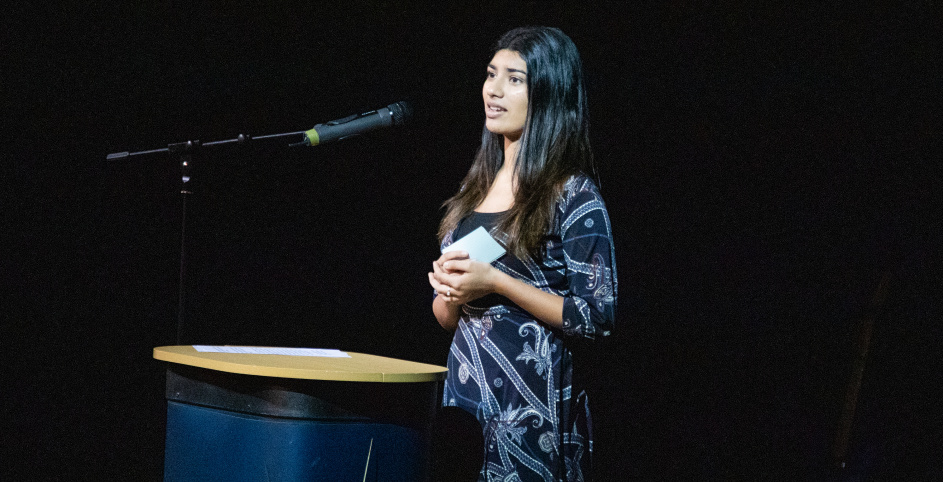 “Can all the parents in the room please close their eyes for a few seconds? Think back to when you were just five years old and an adult asked what you wanted to be when you were older. The Prime Minister, an astronaut, a princess, a monkey perhaps? A friend of mine once told me she’d enthusiastically answered ‘a sausage roll’ when asked this question, so don’t worry, there’s no judgement here. Now open your eyes. Can you please raise your hand if you currently do what you thought you would at five years old? Not many of you at all. Now look at your daughters. Remember asking them this same question? Maybe they answered ‘doctor’ or ‘actor’ or ‘teacher’, but most likely, they answered ‘I don’t know’. And it probably wasn’t because they have no idea what they are interested in, but because they are interested in so many different things.

So maybe this isn’t the right question to ask. Could the three girls I spoke to earlier come up here please? I have a question for each of you. What problem do you see in the world that you want to help solve?

(note from the editor – at this point two visiting girls and Sixth Former Sofia bravely stood up in front of the audience and shared the world problems they wanted to solve; global warming, gender pay inequality and world poverty).

We can’t ask young people what ONE thing they want to be. Because it doesn’t work like that anymore. As you can see, these girls don’t just have one passion. At Burgess Hill Girls, I was given the opportunity to be a writer, a leader, a jazz clarinetist, a student, a Head Girl, a team player, a failure, a success. In just the three years since I left Burgess Hill Girls, I’ve been humbled to be named as one of the top ten undergraduates in the country, led an international charity aiming to widen access to education, been lucky enough to be a student at the University of Oxford, been a speaker and writer aiming to empower minorities in the workplace, an intern in Chile and Argentina, a fierce friend, and most of all, a proud, grateful daughter. I’ve also been the victim of racism and sexism and multiple rejections. And I’m sure I’ll go on to be many more things over the next few years. So no, we shouldn’t be asking our leaders of tomorrow what they want to be when they grow up. We should be asking what problems they see in the world that they want to solve. Girls, you’re growing up in the most incredibly exciting time where technology is constantly presenting new opportunities for growth and you have a real say in how your future unfolds. You don’t have to be restricted by job titles and industries and what others expect of you. So if you’re frustrated by the lack of action around global warming, or curious about how to get more young people the education they deserve or annoyed that girls and boys still don’t have the same opportunities – you’re in the right place.

Burgess Hill Girls is, in my eyes, the best possible place to transition from being a girl with big dreams and ambitions to a young woman who understands how to fulfil them. My parents are first-generation immigrants to the UK and so I grew up surrounded by Indian culture. The main value they instilled in me is to never ever take a quality education for granted. When they first came to this country as young medical graduates, they went on a day trip to Oxford and gazed up in awe at the dreaming spires, wondering if their children would ever get the chance to attend the renowned University. My parents sacrificed a lot to enable me to go to school at Burgess Hill Girls and it was completely worth it to them. This school gave me the space to grow and thrive, to explore so many things that I never even thought I would be curious about. When I doubted myself, my teachers showed me what I was capable of. When I failed, they taught me to dust myself off and get back up. When I succeeded, they celebrated right alongside me. Not only that, but they taught me how to do all of those things for myself. So now that I’ve left, now that I’ve lived, studied and worked across three different continents and four countries, when I have to deal with nasty people who do and say terrible things, I can rise above it and push myself to be the best I can be, not to prove those people wrong, but to prove myself right. And I’m gradually fulfilling my dreams every single day.

I joined this school with no voice and left with a determined, passionate one. As I stood about to plant my tree at the end of my time as Head Girl (an old tradition we have), I talked about the power of hard work and PMA – a positive mental attitude. Now, three years later, I’m going to leave you with the same thing. Girls, life will throw so many exciting opportunities and difficult obstacles at you and you’ll have no idea when they’re going to come. That’s pretty scary, right? But if you work hard, if you say yes to opportunities and you always persist with a positive attitude, you will fulfil your dreams of solving those problems you told me about. And Burgess Hill Girls will be there with you every step of the way.”