Year 9 Maddie, was selected as one of the ten finalists in the schools competition organised by ICHF (International Craft and Hobby Fairs). Her task was to design a garment or an outfit using reclaimed fabrics, unloved garments and found trimmings. Throughout the task students were asked to focus on the trend forecast for 2017/2018 which looks at floral.  Each competitor was required to produce three boards, the first being a mood board reflecting the chosen direction. The second needed to show three complete designs which could be part of a collection. The third board needed to detail the final design which would then be manufactured. Maddie’s chosen theme was ‘Second Hand Rose’. 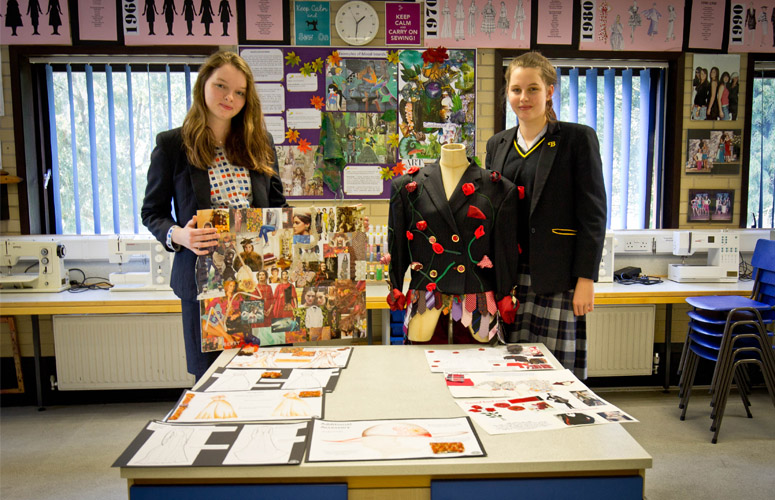 Her design idea was based on modification of a man’s suit jacket into a more feminine jacket. She chose to add many ties to the lower edge of the jacket to give a skirt effect. An old knitted sweater and some of the narrow tie ends were used to create 3D roses on the jacket. The overall effect was stunning and when teamed with red trousers looked fantastic on the catwalk which was held at the Fashion and Embroidery exhibition at NEC Birmingham in March. Although Maddie was not one of the prize winners to be selected as a finalist in a National competition is an awesome achievement. What makes her success even more remarkable is that Maddie has had very little Textile experience before joining Burgess Hill Girls.

A few weeks after the excitement of this Fashion Show we received the news that Maddie’s elder sister Bridget, Lower Sixth, had been selected as the third prize winner in the England Wool4school competition. This design competition originated in Australia then became big in Hong Kong and this is the first time that the competition has been held in UK.   Bridget is studying both Art and Textiles so this was a great way to develop her skills in both of these subjects. The task required Bridget to design a stage outfit for a musician. Bridget chose ‘Florence and the Machine’ as her musician and designed a flowing jumpsuit and coat for her to wear. The outfit did need to be made from at least 80% wool which was a challenging design requirement.  Her stunning outfit took inspiration from William Morris and natural forms and used rich oranges and golds to great effect. Bridget wins a trophy, prize money and an invitation to a wool workshop.

Betty and Isabel were also finalists at the competition, well done girls! 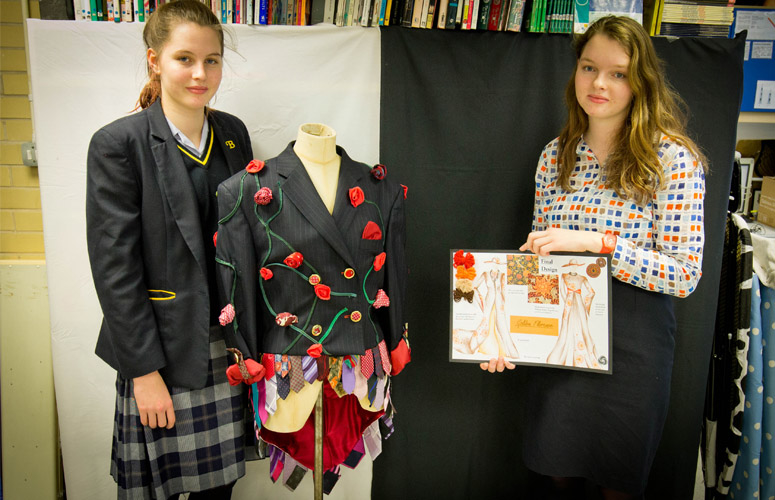